Giving Thanks for a Healthy Feast: How to Lighten Up Thanksgiving Fare Due to travel restrictions, tighter budgets and concern for the health of loved ones, Thanksgiving might be a smaller affair this year, but that’s no reason to give up on having a scrumptious celebratory meal. Giant turkeys may not grace as many tables as usual, so it’s the perfect time to up the side-dish game, embracing healthier options and taking advantage of an abundant supply of delicious, in-season produce.

To right-size the Thanksgiving spread for carnivores, “Get a Cornish hen or another small bird from a local poultry producer, or consider turkey parts like breasts or thighs, instead of cooking an entire big bird,” advises Steven Satterfield, co-owner and executive chef of the Miller Union restaurant, in Atlanta, and author of Root to Leaf: A Southern Chef Cooks Through the Seasons.
For sides that rate high in both nutrition and flavor, the James Beard winner favors in-season veggies like brassicas and Asian greens. “Napa cabbage is great roasted, grilled or prepared raw as a salad. Brussels sprouts shaved on a mandolin and sautéed briefly with shallot and garlic, and dressed with apple cider vinegar and diced apple, is another nice option,” Satterfield says. One of his go-to dishes is a root vegetable salad with shaved celery root, walnuts, apples and dried cranberries with a simple dressing of olive oil and lemon.

Sweet potatoes and pumpkin offer a nutritional edge over white potatoes, giving them top billing at Satterfield’s holiday table. He suggests simplifying the traditional sweet potato casserole by first parboiling, straining, peeling and cutting the potatoes into thick chunks, and then baking with maple syrup or brown sugar, lemon juice, nutmeg and water. “The sweet potatoes will caramelize and form a natural syrup. It has a bright and refreshing flavor without adding the usual butter, marshmallows and sugar,” he explains.

According to Satterfield, many nutritious bitter greens are plentiful this time of year, including chicory, radicchio, frisée and endive. “Last Thanksgiving, I made a chicory salad with dates, pecans, shaved parmesan and persimmon with a sherry vinaigrette with olive oil and shallots. The sweetness of the fruit balances nicely with the bitter greens, which add fiber and help with digestion and the circulatory system.”

Thanksgiving offers a good opportunity to go meatless, according to Kim Campbell, vegan chef and author of The PlantPure Nation Cookbook. “There is a substitute for every animal product out there, so it’s not hard to make traditional recipes plant-based,” says the Hillsborough, North Carolina chef. Her recipe for a nutty or beanie loaf ramps up the flavor and health profiles by using fresh, rather than dried, herbs such as rosemary, thyme and sage, as well as natural binding agents like lentils, flax seeds or chia seeds mixed with water. “Guests will be amazed that whole foods can be so flavorful and satisfying,” she says. “Go the extra mile with quality ingredients for a special meal like this.”

Campbell encourages people to enjoy the abundance of fresh produce and learn how to cook in season. Fruit-based desserts can be a great way to showcase what’s in season and still keep guests light on their feet. “You don’t have to use crust or a lot of added sugar for something like an apple crisp or cobbler,” she says.

Annemarie Ahearn, founder of the Salt Water Farm cooking school, in Lincolnville, Maine, also suggests a healthful rethinking of traditional Thanksgiving dishes. “Instead of a green bean casserole, consider blanched green beans with almond and cranberry. Dried cranberries can go in a salad, rather than a sauce. You can have the same ingredients and keep the same focal point, but use less cream and dairy,” says the author of Full Moon Suppers at Salt Water Farm: Recipes from Land and Sea.

Ahearn, who teaches a class on Thanksgiving cooking, encourages people to take a stroll after the main meal to let food settle before having dessert. She also suggests serving some dishes at room temperature to relieve the pressure of having everything arrive hot at the table. For those unable to be with extended family, Satterfield suggests trading recipes in advance, and then having a virtual Thanksgiving by sharing a visual image of how the meal turned out. “You can even send leftovers if you’re in the same vicinity,” he says.

This vegan twist on the classic green bean casserole recipe is a healthy way to incorporate more vegetables into Thanksgiving feasts. Read More »

Delicious maple syrup, orange juice, cinnamon and cranberries are boiled down to a syrupy, slightly sweet and spicy sauce in this tasty holiday recipe. Read More »

This gluten-free, vegan and paleo recipe for Pumpkin Spice No-Bake Energy Balls combines the flavors of fall for a healthy and delicious treat. Read More » 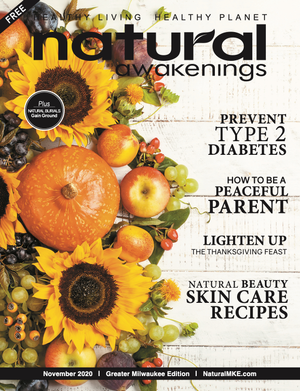