Ernesto Atkinson  on the Wonder and Awe of the World As producers of culture, artists act as historians, entertainers and mentors while enlightening our world with imagery that captures both the lightness and darkness of humanity. Over the years, Milwaukee artist Ernesto Atkinson has seen suffering as well as the unspoken joy and kindness of everyday life, and he captures the latter in his art when he finds it in others or within himself.
He was born in Antigua, a small city in southern Guatemala. His biological father died when he was 7 years old, but the boy’s creativity helped his family survive: He drew portraits and crafted love letters to sell to couples strolling through a local park. “I’d approach them and ask if I could write a poem for them. I also made drawings for the couples inspired by the Care Bears cartoons,” he reflects.

La Divina Vida [oil on canvas]
With a growing interest in art, he began writing poetry and won some contests. When he was 13, Ernesto met Patrick Atkinson, an author, social worker and human rights activist from North Dakota—and the man who would eventually adopt him. Patrick started the nonprofits GOD’S CHILD Project, and the Institute for Trafficked, Exploited & Missing Persons. The latter is dedicated to helping victims of human trafficking.
After he adopted Ernesto, Patrick influenced him to pursue social work. Ernesto studied at Centro Educativo El Gran Moyas, in Sacatepequez, Guatemala, where he earned a bachelor’s degree in science and letters. He went on to work as an anti-human-trafficker and social worker. “I started utilizing art to support other people and open their eyes to things,” he says.
E 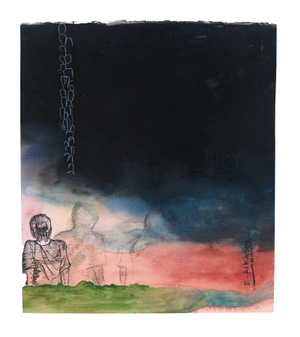 rnesto created his own organization, Tierra de Gigantes, or Land of Giants, to help kids ages 8 through 12 from households experiencing domestic violence and poverty. “Those kids had great minds. We used to go to art galleries and shows. We fundraised by cleaning streets and picking up plastic bottles and cans, and we sold those recyclables to buy art supplies. That’s how I combined art with social work.”
Helping human trafficking victims often put Ernesto in unsafe situations. With his father’s encouragement, he immigrated to the United States to pursue art and art therapy, and he earned a Bachelor of Arts with an Emphasis in Painting from North Dakota State University, in Fargo. He also holds a Master of Arts in Art Therapy from the School of the Art Institute of Chicago, and it was in the Windy City where he met his future wife, Jenny Urbanek, who is from Milwaukee. Ernesto opened his private art therapy practice, Integration Healing/Alivio Integral, in Milwaukee’s Third Ward. Through his art, which has been shown at many exhibits throughout the area, Ernesto continues his quest to capture the light that comes from darkness.

Mirroring the Beauty of Life 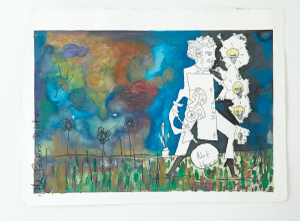 The colors of Guatemala are reflected in most of Ernesto’s work. “That’s why my pictures are very vibrant,” he says. “My art reflects my discovery that even though there’s a lot of suffering, there’s a lot of unspoken joy and kindness, as well. I wanted to bring that out of people and out of myself. If I’m able to bring that out of myself, I can also learn about myself during the process.”
While Ernesto prefers oil paint, he includes a variety of mediums in his art. He sculpts, and incorporates found objects. He carries a sketchbook wherever he goes so he can capture and create ideas.
Some artists prefer to work during a certain time of the day or at a certain place. Others work whenever the muse strikes. For Ernesto, everything starts with a vision in his mind. From there, he breaks it down and starts building. He’s influenced by different genres of music, particularly jazz and Native American music.
“I think different sounds and types of music influence my brush strokes, my movement and my body,” Ernesto affirms. “It’s like a whole movement—like a dance between the canvas and me. We have a conversation and we dance together.”
For Ernesto, his work has grown and changed with him. The poverty and the pain from Guatemala’s 36-year-long civil war is reflected in his earlier work. “When I was in college and after, my work was very political. Then I realized that a lot of artists were already talking about that. I wanted to talk about love and happiness. From that moment, my work evolved with the emotion I had experienced. It’s now a conversation between the canvas and me.” 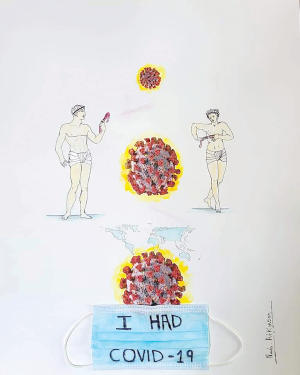 Although Ernesto’s current pieces capture love and joy, he feels that the role of an artist is to remember what they’ve experienced. “Art recalls history, and I think that’s very important,” he says. One of his pieces, titled I had COVID, references not only the pandemic, but also the #MeToo movement.

“I sketched a male and a female—and a sign reading #MeToo—with them both stepping onto the world. At the bottom is a surgical mask representing COVID. That’s a response of what’s happening in our society. That marks history. The role of an artist is to remember what we have gone through.”
Everyone has a different definition of success. For Ernesto, success as an artist is the completion of what he has done and how he has impacted others, not necessarily what people think about his work. “Making art and creating is success. Being a successful artist is doing what I love and making what I love.”

Ernesto strives to share more of his artwork with the community. As an art therapist and as an artist, he wants society to have a more colorful smile. “There’s already color and a smile, but I want it to be bigger, brighter and more colorful. I want to bring more art, more creativity, more wonder and more awe,” he says. “We’re not just one thing—I’m a poet, a writer and a child of the world with multiple faces. I want people to slow down and start seeing our awe, the moments around us and the knowledge given to us.”
For more information about Ernesto Atkinson and his work, visit ErnestoAtkinson.com or AlivioIntegral.com.